Carnival is celebrated in every town and village on the island, but the most spectacular carnival celebrations are to be found in Santa Cruz de Tenerife and Puerto de la Cruz.

The Santa Cruz festivities are almost the island carnival as it attracts so many people from all over the island. There is a very complete programme of activities drawn up by the fiestas committee of each town council.

Carnival is celebrated in the street. Plaza de España, in Santa Cruz de Tenerife, is decorated and many different kinds of stalls and kiosks are set up, giving the area music and a festive atmosphere. Once elections have been held for Carnival Queen, her Court and the Junior Carnival Queen, a parade is organised to announce the beginning of Carnival.

The following week is a busy one filled with competitions between different kinds of Carnival groups, bands and dance schools: murgas, rondallas, comparsas, fancy dress competitions and a parade of antique cars. Carnival reaches a climax on carnival Tuesday , with the “coso” (a parade that starts in the afternoon, early evening).

The burial of the sardine is another ritual that is carried out in all the places we have mentioned, although the “burials” held in Los Realejos, La Orotava and Puerto de la Cruz are the best. The sardine is made from rags and cloths. In Santa Cruz de Tenerife, an enormous sardine sitting on a throne is carried through the streets on a float, followed by an entourage of mourners, pregnant men and widows in floods of tears and general hysteria.

The festivities end on the Saturday and Sunday after Carnival Tuesday, with the “Piñata Chica” and all its shows, street parties, parades and exhibitions. 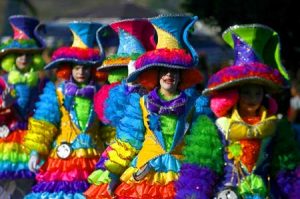 The Pilgrimage of Tegueste, in honour of San Marcos, is also a tribute to the floklore and traditions of the Islands. The festivities start by choosing the “Romera Mayor”, a sort of carnival queen. The proclamation of the fiestas comes after several bouts of Canary Island wrestling, athletics and basketball matches, etc.

The popular pilgrimage itself is what makes these somewhat profane fiestas striking. It is a procession of floats decorated with the natural produce of the countryside, carts, folklore groups from all the Islands, flocks of livestock, yoked oxen, dancers, etc. all accompanied by crowds of people in traditional dress.

After the pilgrimage, the livestock is blessed and an offering is made to San Marcos, consisting of an assortment of farm produce. The next day, the Fiestas Committee hold a potato bake with all the local population. The final act of the fiestas is a bonfire to burn an effigy. The rag doll is made from straw and old clothes, representing a public figure, which is burned amid the shouts, criticism and insults of the public. This bonfire is a ritual manner of returning to the routine of everyday life. 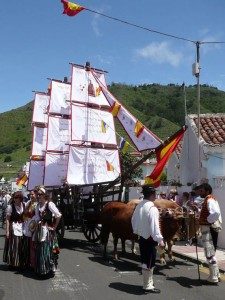 The Pilgrimage of San Benito Abad

The Pilgrimage of San Benito Abad continues to be, given its regional character, the most representative of all those held in different towns and villages of our land. She attracts legions of people dressed in the traditional sense of the Islands themselves singing the songs of our folklore and offering the most representative present. This gives this event a colorful and an excellent opportunity to learn about an important aspect of Canarian culture. This festival takes place on the second Sunday of July. Declared of national interest, is the only pilgrimage to the regional category. The pilgrimages are a true reflection of Beñesmén Guanche (celebration that was to give thanks for the harvest in early summer). The celebration lasts for fifteen days, in which elections are conducted Romera Mayor, Children and the Elderly. The program of events , built around the pilgrimage, consists of numerous activities. From the Proclamation, which marks the beginning of the feast, until the election of Mayor Romeras, Children and Elders, through the various festivals or the Dance of Magos. There will also indigenous games and sports, and traditional fairs Livestock and Horse also won crawl and the main events.

The fiestas in honor of San Bartolomé Tejina held around August 24. The festive events program lasts approximately 15 days and is organized by Festival Committee is formed each year on a voluntary basis. The program has room for all kinds of numbers: cultural, sports, kids, art, folklore, popular … and Hearts. Both individuals and companies based in the village participate and collaborate for greater brilliance of the festivities because, those outside the Commission organized a number, help decorate the square …. make financial contributions, and / or work in the Hearts.

The Feast in honor of the Cristo de La Laguna are held during the month of September being the most important day 14, declared a holiday in the Municipality. The story moves on 09 Image of the Sanctuary to the Cathedral Church. On the 14th, around noon, The Christ returns to her shrine in procession with the assistance of a representative of SM The King. At night take another procession walking the monasteries of Nuns Clear and Catalinas. Returning to the Plaza is the most important results of the Municipality fireworks display in the area known as El Risco, in the mountains of San Roque, in charge of the pyrotechnics of the Province.

At the end, coinciding with the entrance to the Sanctuary Holy Christ, begins the deafening “fireworks” placed all around the Plaza. This act pyrotechnic people come from all parts of the island, collapsing the entire city by the large number of people. Throughout the month, on the occasion of this festival, there are various festive events, cultural and sporting. 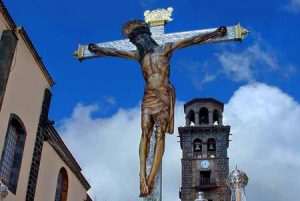 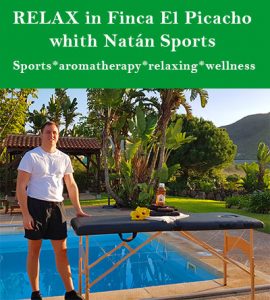